Rankings affect the financial sustainability of English universities, just not for the elite

by Maquina
in Research Methodology
0


University rankings are often presumed to be value neutral, creating equal opportunities for the institutions they order to compete around fixed indicators of quality. However, highlighting new collaborative research, Roxana Baltaru shows how university rankings in the UK have differential effects, producing divergent incentives and pressures for institutions to respond to them.

The financial sustainability of UK universities is fragile and the full impact of Covid and Brexit on the UK higher education sector, which currently relies on tuition fees for more than a half of its income, remains unclear. Universities watch out for their rankings as the chase for students, talented research staff, and third-party investors intensifies. But, are rankings more consequential for some universities than for others?

rankings are a long way away from ensuring meaningful competition. Instead, rankings reinforce and shape competition differentially across institutions

A significant implication of this finding is that rankings are a long way away from ensuring meaningful competition. Instead, rankings reinforce and shape competition differentially across institutions. The financial responsiveness to rankings observed among universities that are not part of the Russell Group can be seen as an opportunity to grow financially by improving in rankings. Equally, financial responsiveness to rankings can be seen as threatening for these universities, as their survival depends on their competitiveness in rankings. This vulnerability to rankings can also translate into tougher managerialist interventions at the university level.

Rankings therefore appear to act in the favour of an elite. The way in which this happens is remarkable, as we note in our paper: Rankings do not advantage elite universities by effectively shaping their financial sustainability; it is rather the absence of an impact, i.e. the financial immunity of elite universities to rankings, that makes them less financially vulnerable to the logic of market competition compared to all other universities. 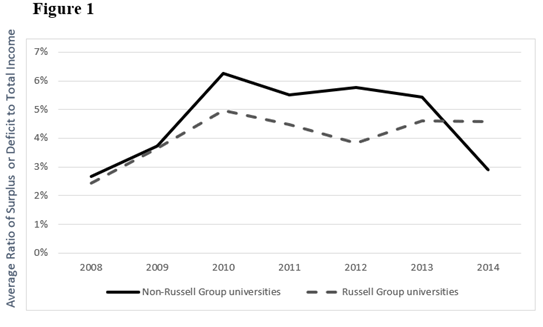 Figure 1 shows the average ratio of surplus or deficit to total income, for a subset of our data i.e., from 2008 to 2014. Note that the intensification of competition between universities, especially since 2012 when tuition fees tripled, has benefited the financial sustainability of the elite, Russell Group universities, as opposed to all other universities in the UK. This may be due to students orienting to universities perceived as prestigious by the public irrespective of how they ranked from a year to another. These universities were already benefiting from research grants and significant amounts of third-party funds, while all other universities, predominantly relying on tuition fees, became more financially vulnerable.

As expected, our models showed that reliance on income from tuition fees explains part of the impact of rankings on the finances of non-Russell Group universities, while elite universities benefit more directly from research income. The impact of rankings on the financial sustainability of universities that are not members of the prestigious Russell Group and the immunity of Russell Group universities to changes in rankings, has been observed controlling for previous levels of financial sustainability, university size, and reliance on income from tuition fees, research, and third-party funds.

The findings bring important considerations in terms of financial regulation. Assuming that a university’s financial wellbeing reflects its performance, one can make a case for not bailing out universities in financial difficulty. Opponents of bailouts point out that there is no reason why failing providers should continue to attract students that could go to ‘better managed’ universities. But, if elite universities are financially immune to changes in rankings, only universities without consolidated reputations are prone to fail.

It is these institutions that do much of the widening participation work. As disadvantaged students disproportionally enter universities that are not part of an elite, catering for the financial needs of these universities is also about maintaining educational access for disadvantaged individuals.

In 2017, the National Audit Office signalled that the weighting of widening participation onto universities at the bottom of the hierarchy risks creating a two-tier system. The current research shows how the market-oriented logic of performance competition aggravates this two-tier system, as elite universities can circumvent competition to some extent, while market vulnerability is shifted onto all other universities, and indirectly, onto the students inside them.

This sector-wide problem requires complex solutions impossible to cover here. The current research adds to the existing studies showing that market-oriented reforms in the UK higher education are a long way from securing the meaningful competition that could level the playing field between HE providers. Reconsidering the market-oriented assumptions made about the higher education system may seem a bold move, but it may be just what evidence-driven policy would look like in this scenario.

Can blogs change the world? The policy influence of LSE Blogs

Just how important is the problem of predatory publishing?

Can blogs change the world? The policy influence of LSE Blogs

Just how important is the problem of predatory publishing?

Is there a future for the academic social capital held on twitter?

Double-anonymised peer review is not the answer to status bias

To understand uses of personal data in the present, people draw on the past and imagine the future

Aristotle on the middle class